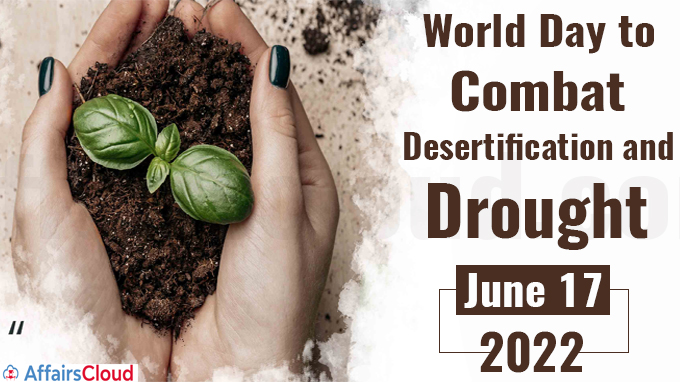 The United Nations(UN)’s World Day to Combat Desertification and Drought is annually observed across the globe on 17th June to create awareness about Drought, one of the most destructive natural disasters in terms of loss of life, arising from impacts like wide scale crop failure, wildfire and water stress.

The theme of World Day to Combat Desertification and Drought 2022 is “Rising up from drought together”.

The global observance of the Desertification and Drought Day(DDD) 2022 is hosted by the Government of Spain. The events will take place in Madrid, Spain.

Note: Spain is vulnerable to drought, and water shortages and is connected to the impacts of climate change.

i.The United Nations General Assembly (UNGA) adopted the resolution A/RES/49/115 in December 1994 and proclaimed the 17th June of every year as the World Day to Combat Desertification and Drought.

ii.The first ever World Day to Combat Desertification and Drought was observed on 17th June 1995.

i.Desertification is a phenomenon that ranks among the greatest environmental challenges of our time. It includes encroachment of sand dunes on land but doesn’t refer to the advance of deserts.

ii.It is estimated that, by 2050, droughts may affect around 3 quarters of the world’s population.

iii.Land degradation and climate change have worsened the conditions and increased the frequency and severity of droughts, up 29% since 2000. Drought has affected around 55 million people across the globe every year.

i.The 1992 Rio Earth Summit identified desertification, climate change and the loss of biodiversity, as the greatest challenges to sustainable development.

Scientists have identified bacteria that can replace fertilizers & fungicides in…

Nearly 5mn in India displaced due to Climate Change,…